I’ve spent the past two years working with a fun little company in the healthtech world.

In January 2018 my team was 2 engineers with a vague idea about solving a growing data problem. Today it is a 28-strong team building a ML model management tool that powers AI symptom checkers across the globe. To manage the ML model powering this AI, we have built a sophisticated Model Management Service that doctors use to input medical information, their relationships to each other (things like “a cough can be caused by the flu”) and teach the ML Model the probability of that relationship in different parts of the world.

Our system is a Django powered service using graphQL API and we have a React frontend that uses this API. I was the original developer on this project and I already had a lot of experience with Django. We picked up Django for the batteries-included stuff, like auth-o and auth-z, ORM, routing, and the strong library of plugins. I didn’t have a styleguide or pattern in mind when I started building the project, I just took what I knew about Django and some patterns I had followed before and emergent design “happened”.

As we grew the team and took on more feature requests, and we started to be constrained by the organisation of our codebase. I encouraged the team to read the Django documentation to learn more about how we should be formatting code, but it didn’t really help. The documentation, from the tutorials to the full docs, talk about a model-view-controller world in which Django renders HTML and delivers it to a web browser.

Something about this struck me as odd - I have worked with Django since 2012, and I only remember using it to render HTML once. Nearly all my time with Django, and all the time I have seen Django being talked about at conferences, has been to provide an API (usually with Django REST Framework) to a frontend project. I would argue that this is actually the defacto standard for Django today. The documentation is out of date for the current popular use-cases. This is generally a trend I am seeing with Django - the project is trying to modernise how it is run and even how to handle async properly. Maybe it is time Django re-considered the design patterns it suggests for developers too?

Back to my immediate problem: in order to help the team organise their software better, I set out to find a good styleguide from the community. I read about Domain Driven Resign, the benefits of bounded contexts, and I found a nice styleguide by Hacksoft that we tried to use. This was great! The documentation here was very sound, and perfect for smaller projects or small companies.

But during our experiementation with it we found it wasn’t fit for purpose for a few reasons. Namely, the fact that is encouraged business logic to live in the models. Django also recommends this and it is basically the active record pattern. In our experience with very large teams, keeping business logic tied to the models encouraged developers to fill up models.py with tonnes of code. This makes it very hard for developers to work on one file at the same time. Not to mention the fact that when a single file owns more than one problem in a domain (presentation, data, controller, etc) it tends to suck all other problems into the file too.

Another downside to the Hacksoft pattern that we had to deal with, which I think is somewhat unique to ML or data-heavy projects, is leaking data dependencies. It turns out that just like good Domain Driven Design, ML-based or data-heavy projects need good Data Design too. Otherwise you put in a huge amount of effort to separate business problems only to discover data ties it all together and silenty erodes the boundaries you tried so hard to create. There has even been a paper published which analyses this. Suffice to say - we definitely had these issues in our Model Management Service.

What we wanted in our styleguide was a pattern that encouraged strong bounded contexts between the “domains”, encouraged “skinny models” so that developers didn’t put a boat load of code into one place, and was generally flexible enough to suit most situations.

We started to take the parts of Hacksoft’s styleguide and adapt it to suit our own needs. We encouraged skinny models and a strongly-bounded-context between our “domains” (basically Django’s apps). We were then told that we had to start scaling the software fast, very fast. I’m not talking “make the software 10x faster” fast, I mean “deliver 10x more features on this now, here is 12 developers, go.” fast. It was a crazy hectic time. Probably one of the hardest times of my career so far. This styleguide emerged from it, and so far it has proven useful for us.

I am publishing an Open Source copy of the styleguide today to gather feedback and share what we have learned.

You can now read the Django API Domain Styleguide here. 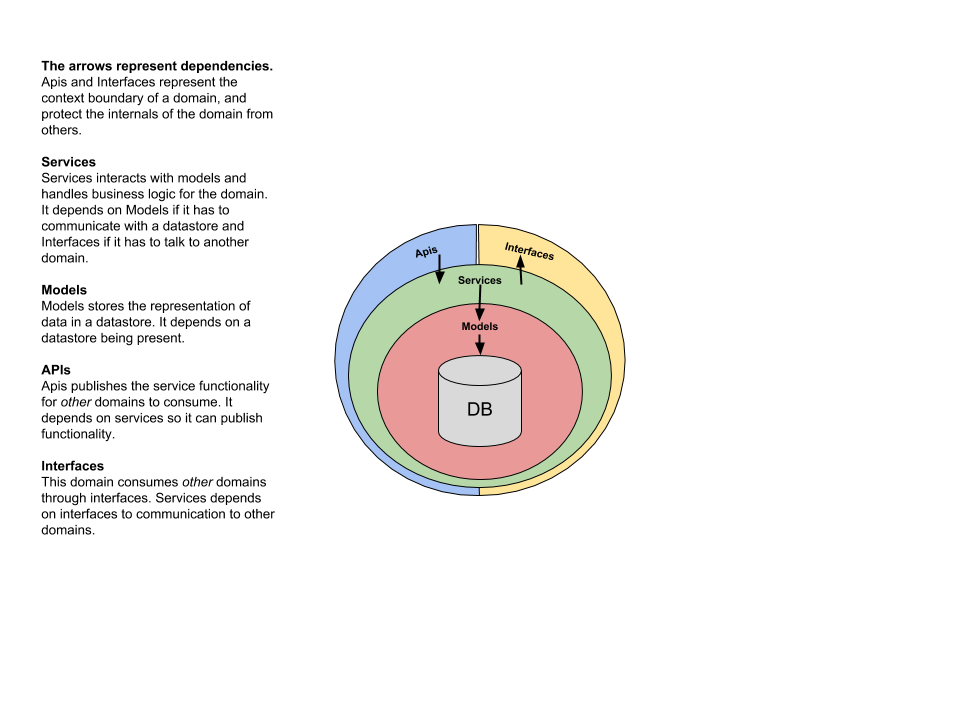 There are a few key goals of this styleguide that I want to cover in-depth (the guide itself just bullet-points them). It should help differentiate this styleguide from other existing ones.

Django does a good job of encouraging sensible separation of concerns in it’s own styleguide. A django app is a packagable, reusable piece of code that solves a business problem. Our guide aims to move this pattern closer to a true Domain idea - full encapsulation, with clearly defined boundaries in and out of the Domain.

The implementation of the APIs / Interfaces in a domain creates a bounded context that isolates all data and functionality going into and out of it. The idea behind this being that, when a domain moves or a domain wants to change it’s service, it won’t need huge refactoring to work with the rest of the system. It also encourages developers to think in a graceful failing mindset.

In a blitz-scaling team you’re often blocked by the number of people who can collaborate on a project at once. This can happen if the software isn’t designed to keep developers spread out in the project. Our styleguide encourages domain separation to increase developer velocity and when it makes sense for business problems. For example - do you have more than six developers working in one domain? Maybe it’s time to split that so the teams can work more autonomously.

Reduce the effort to refactor and move code

If you follow our styleguide you will create software that is made up of lots of isolated components. Each component should be easy to pull out and put somewhere else without much disruption. This builds upon Django’s original goals of apps but extends it more.

As mentioned at the start of this post, most Django projects provide APIs for a Front end, including the one we have built. It makes sense for the styleguide to benefit this and drop any support for server-side-rendered-views as we don’t need them. We go all in on this in our styleguide.

This isn’t the end of the journey for this styleguide. I want to gather feedback from the community and see if this helps other people. Additionally, I want to start encouraging the Django community to consider if we should be re-designing the suggested patterns in Django’s documentation. If we are looking to give the project and community a fresh coat of paint in some areas, maybe we should be doing it in the styleguide section too.